Hi Patrik, you will play at Untertauchen 5 years anniversary. We are looking forward to your live set and want to do a short Interview with you.

What can you expect if you go out to Agaric Live?

One can expect an actual live set provably a bit more techno oriented than my recent records, I’ve worked on it to be as direct and spontaneous as possible, and there is now, after performing a few of the sets so far this year, so much to do on the machines that I kind of wish I had three hands on stage :).

Please describe the beginning of your work as a DJ and Producer and the moment you have realized its a bit more than collecting stamps.

Oh you mean liking record buying to collecting stamps? Well in any case I got into it first attempting to make industrial and „body music“ mid 90s I guess and then when things went more in a techno and house direction djing came along with that, me and my friend Slobodan got a gig at a London event that the guys from intergroove organised and since around the end of 90s we started meeting likeminded people, producers and other djs and getting more and more frequent gigs around scandinavia and Europe, was so much fun! I started a label already before I was 20 and slowly learned more about the ins and outs of that as things went along.

Tell us about a funny moment in a club while playing.

Recently I ended up playing like 7 hours or something at my 2nd visit to this amazing Moscow club called Monasterio, this is not the worlds longest set or anything like that, but when I finally threw in the towel I told the promoter that I really needed to goto sleep but that was kind of a lie, the truth was that my feet hurt too much to stand up any longer. Haha I’ve never had that issue before.

The Top Three Producers for you at the moment?

I can’t give you a top three but three random producers that I like are Random Audio, Manuel Gonzalez & Inland.

Underground art and music is unlike commercial art not created with the purpose of it being liked, bought, duplicated, or sold to the average consumer. It’s something presented by individuals who dont care whether or not you like it, but want to express any original idea or emotion. Techno is often repeated, and not always original. It is also still evolving, and blowing new minds, after 25 years! That’s a respectable current and classic music genre, that needs global acknowledgement in a new world club-music scene of cash greedy, self-repeating, soap smelling „EDM“.

What is your favorite food and why? 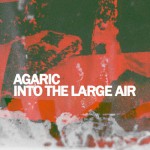 Agaric just released his 2nd full length album „Into the Large Air“ two weeks ago on We Are Records.

Your dancefloor needs you!

Happiness Express is about to kick off to make you happy!